And I beheld another beast coming up out of the earth; and he had two horns like a lamb, and he spake as a dragon. And he exerciseth all the power of the first beast before him, and causeth the earth and them which dwell therein to worship the first beast, whose deadly wound was healed (Revelation 13:11-12 emphasis added).

There is only one nation that qualifies to be the second beast, based on the criteria mentioned in this passage. The power described would have to become a mighty nation in order to exercise authority over all the nations of the world. It had to have arisen out of an unoccupied territory, because it was “coming up out of the earth,” or the opposite of the sea, which symbolizes occupation of many nations and languages.

As seen in the passage above, the power would have lamb-like qualities, but would speak like a dragon. This means that the nation must have attributes of Christ, but that it would relinquish these in favor of attributes of the dragon.

The United States of America is a global power that was established in a sparsely populated area of the world. During the 1260 years of persecution against the Protestant Church, God was preparing a place of escape for His persecuted saints. At the right time, as the Reformation was gaining power and the Catholic Church was weakening, Protestant Christians came across the Atlantic to escape the reach of Rome’s oppressive arm.

In this passage, the earth represents the uninhabited New World to which the woman (the persecuted Church, see Jeremiah 6:2 and 2 Corinthians 11:2) fled to escape papal persecution. By 1776 the War of Independence had ended. The American Constitution came into effect in 1789. Just around the time of the end of the 1260-year prophecy, the USA was rising as an independent nation—exactly in the time frame predicted by the Bible.

Life, Liberty, and the Pursuit of Protestantism

America was founded on lofty Christian principles of freedom and equality. It represented everything Rome hated. America’s two greatest documents, the Declaration of Independence and the Constitution, are filled with Protestant declarations that are absolutely intolerable to Rome. America was the bastion of Protestantism, a free world with no monarch that could be controlled by Rome as the many monarchs of Europe had been for centuries. 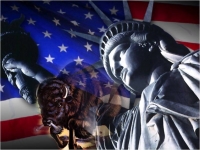 America had a republican form of government. It spelled a massive threat to the rebuilding of Rome’s control in the aftermath of the Protestant Reformation. Not surprisingly, we find the Vatican opposed to the founding documents of the United States, as Avro Manhattan, British broadcasting journalist and author of over 20 books on the Vatican tells us:

The Vatican condemned the Declaration of Independence as wickedness and called the Constitution of the United States a Satanic Document.i

Plans had been laid at the Council of Trent (1545-1563) and subsequent Councils to regain the power lost during the Reformation. This Counter Reformation that began during the Council of Trent had to ensure that the new nation of America did not get strong enough to oppose Rome’s plans. The early founders of America recognized the threat their new country posed to the Old World power. Many founding leaders wrote of this threat and did what they could to prevent it.

Charles Chiniquy, an ex-Catholic priest and author of the book Fifty Years in the Church of Rome, lived during the early part of America’s history. In his book, he writes, “Rome saw at once that the very existence of the United States was a formidable menace to her own life.”iiHe also wrote, “Liberty of conscience is proclaimed by the United States a most sacred principle, which every citizen must uphold…But liberty of conscience is declared by all the popes and councils of Rome, a most godless, unholy, and diabolical thing, which every good Catholic must abhor and destroy at any cost.”iii

It was in 1854 that Pope Pius IX wrote, “The absurd and erroneous doctrines or ravings in defense of liberty of conscience are a most pestilential error—a pest, of all others, most to be dreaded in a state.”iv

The Papacy thoroughly detests liberty of conscience. In 1864, in his encyclical Quanta Cura, Pius IX condemned to hell “those who assert liberty of conscience and of religious worship.”v The United States of America’s founding principles were obviously a serious threat to Rome, and not to be tolerated. Many saw Rome making silent subtle advances into America’s inner workings through Rome’s secret police, the Jesuits.

As the years progressed, through the subtlety of these enemies and America’s diminished faithfulness to its Protestant roots, the nation was slowly changed and infiltrated. It no longer resembles the lofty ideal it once stood for.