Here are fourteen natural phenomena which conflict with the evolutionary idea that the universe is billions of years old. The numbers listed below in bold print (usually in the millions of years) are often maximum possible ages set by each process, not the actual ages. 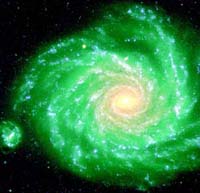 Here are fourteen natural phenomena which conflict with the evolutionary idea that the universe is billions of years old. The numbers listed below in bold print (usually in the millions of years) are often maximum possible ages set by each process, not the actual ages. The numbers in italics are the ages required by evolutionary theory for each item. The point is that the maximum possible ages are always much less than the required evolutionary ages, while the Biblical age (6,000 years) always fits comfortably within the maximum possible ages. Thus, the following items are evidence against the evolutionary time scale and for the Biblical time scale. Much more young-world evidence exists, but I have chosen these items for brevity and simplicity. Some of the items on this list can be reconciled with the old-age view only by making a series of improbable and unproven assumptions; others can fit in only with a recent creation.

1. Galaxies wind themselves up too fast.

The stars of our own galaxy, the Milky Way, rotate about the galactic center with different speeds, the inner ones rotating faster than the outer ones. The observed rotation speeds are so fast that if our galaxy were more than a few hundred million years old, it would be a featureless disc of stars instead of its present spiral shape.1 Yet our galaxy is supposed to be at least 10 billion years old. Evolutionists call this “the winding-up dilemma,” which they have known about for fifty years. They have devised many theories to try to explain it, each one failing after a brief period of popularity. The same “winding-up” dilemma also applies to other galaxies. For the last few decades the favored attempt to resolve the puzzle has been a complex theory called “density waves.”2 The theory has conceptual problems, has to be arbitrarily and very finely tuned, and has been called into serious question by the Hubble Space Telescope’s discovery of very detailed spiral structure in the central hub of the “Whirlpool” galaxy, M51.3 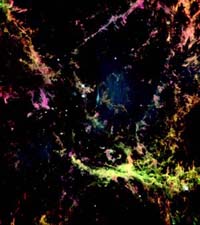 According to astronomical observations, galaxies like our own experience about one supernova (a violently-exploding star) every 25 years. The gas and dust remnants from such explosions (like the Crab Nebula) expand outward rapidly and should remain visible for over a million years. Yet the nearby parts of our galaxy in which we could observe such gas and dust shells contain only about 200 supernova remnants. That number is consistent with only about 7,000 years worth of supernovas.4

According to evolutionary theory, comets are supposed to be the same age as the solar system, about five billion years. Yet each time a comet orbits close to the sun, it loses so much of its material that it could not survive much longer than about 100,000 years. Many comets have typical ages of less than 10,000 years.5 Evolutionists explain this discrepancy by assuming that (a) comets come from an unobserved spherical “Oort cloud” well beyond the orbit of Pluto, (b) improbable gravitational interactions with infrequently passing stars often knock comets into the solar system, and (c) other improbable interactions with planets slow down the incoming comets often enough to account for the hundreds of comets observed.6 So far, none of these assumptions has been substantiated either by observations or realistic calculations. Lately, there has been much talk of the “Kuiper Belt,” a disc of supposed comet sources lying in the plane of the solar system just outside the orbit of Pluto. Some asteroid-sized bodies of ice exist in that location, but they do not solve the evolutionists’ problem, since according to evolutionary theory, the Kuiper Belt would quickly become exhausted if there were no Oort cloud to supply it.

4. Not enough mud on the sea floor.

Rivers and dust storms dump mud into the sea much faster than plate tectonic subduction can remove it.

Each year, water and winds erode about 20 billion tons of dirt and rock from the continents and deposit it in the ocean.7 This material accumulates as loose sediment on the hard basaltic (lava-formed) rock of the ocean floor. The average depth of all the sediment in the whole ocean is less than 400 meters.8 The main way known to remove the sediment from the ocean floor is by plate tectonic subduction. That is, sea floor slides slowly (a few cm/year) beneath the continents, taking some sediment with it. According to secular scientific literature, that process presently removes only 1 billion tons per year.9 As far as anyone knows, the other 19 billion tons per year simply accumulate. At that rate, erosion would deposit the present mass of sediment in less than 12 million years. Yet according to evolutionary theory, erosion and plate subduction have been going on as long as the oceans have existed, an alleged three billion years. If that were so, the rates above imply that the oceans would be massively choked with sediment dozens of kilometers deep. An alternative (creationist) explanation is that erosion from the waters of the Genesis flood running off the continents deposited the present amount of sediment within a short time about 5,000 years ago.

5. Not enough sodium in the sea.

Every year, rivers10 and other sources11 dump over 450 million tons of sodium into the ocean. Only 27% of this sodium manages to get back out of the sea each year.12,13 As far as anyone knows, the remainder simply accumulates in the ocean. If the sea had no sodium to start with, it would have accumulated its present amount in less than 42 million years at today’s input and output rates.14 This is much less than the evolutionary age of the ocean, three billion years. The usual reply to this discrepancy is that past sodium inputs must have been less and outputs greater. However, calculations that are as generous as possible to evolutionary scenarios still give a maximum age of only 62 million years.15 Calculations16 for many other seawater elements give much younger ages for the ocean.

6. The earth’s magnetic field is decaying too fast. 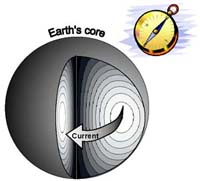 Electrical resistance in the earth’s core wears down the electrical current which produces the earth’s magnetic field. That causes the field to lose energy rapidly.

The total energy stored in the earth’s magnetic field (“dipole” and “non-dipole”) is decreasing with a half-life of 1,465 (± 165) years.17 Evolutionary theories explaining this rapid decrease, as well as how the earth could have maintained its magnetic field for billions of years are very complex and inadequate. A much better creationist theory exists. It is straightforward, based on sound physics, and explains many features of the field: its creation, rapid reversals during the Genesis flood, surface intensity decreases and increases until the time of Christ, and a steady decay since then.18 This theory matches paleomagnetic, historic, and present data, most startlingly with evidence for rapid changes.19 The main result is that the field’s total energy (not surface intensity) has always decayed at least as fast as now. At that rate the field could not be more than 20,000 years old.20

7. Many strata are too tightly bent.

In many mountainous areas, strata thousands of feet thick are bent and folded into hairpin shapes. The conventional geologic time scale says these formations were deeply buried and solidified for hundreds of millions of years before they were bent. Yet the folding occurred without cracking, with radii so small that the entire formation had to be still wet and unsolidified when the bending occurred. This implies that the folding occurred less than thousands of years after deposition.21

Natural radioactivity, mutations, and decay degrade DNA and other biological material rapidly. Measurements of the mutation rate of mitochondrial DNA recently forced researchers to revise the age of “mitochondrial Eve” from a theorized 200,000 years down to possibly as low as 6,000 years.22 DNA experts insist that DNA cannot exist in natural environments longer than 10,000 years, yet intact strands of DNA appear to have been recovered from fossils allegedly much older: Neandertal bones, insects in amber, and even from dinosaur fossils.23 Bacteria allegedly 250 million years old apparently have been revived with no DNA damage.24 Soft tissue and blood cells from a dinosaur have astonished experts.25 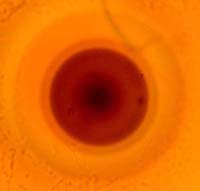 Radiohalos are rings of color formed around microscopic bits of radioactive minerals in rock crystals. They are fossil evidence of radioactive decay.26 “Squashed” Polonium-210 radiohalos indicate that Jurassic, Triassic, and Eocene formations in the Colorado plateau were deposited within months of one another, not hundreds of millions of years apart as required by the conventional time scale.27 “Orphan” Polonium-218 radiohalos, having no evidence of their mother elements, imply accelerated nuclear decay and very rapid formation of associated minerals.28,29

10. Too much helium in minerals.

Uranium and thorium generate helium atoms as they decay to lead. A study published in the Journal of Geophysical Research showed that such helium produced in zircon crystals in deep, hot Precambrian granitic rock has not had time to escape.30 Though the rocks contain 1.5 billion years worth of nuclear decay products, newly-measured rates of helium loss from zircon show that the helium has been leaking for only 6,000 (± 2000) years.31 This is not only evidence for the youth of the earth, but also for episodes of greatly accelerated decay rates of long half-life nuclei within thousands of years ago, compressing radioisotope timescales enormously.

11. Too much carbon 14 in deep geologic strata.

With their short 5,700-year half-life, no carbon 14 atoms should exist in any carbon older than 250,000 years. Yet it has proven impossible to find any natural source of carbon below Pleistocene (Ice Age) strata that does not contain significant amounts of carbon 14, even though such strata are supposed to be millions or billions of years old. Conventional carbon 14 laboratories have been aware of this anomaly since the early 1980s, have striven to eliminate it, and are unable to account for it. Lately the world’s best such laboratory which has learned during two decades of low-C14 measurements how not to contaminate specimens externally, under contract to creationists, confirmed such observations for coal samples and even for a dozen diamonds, which cannot be contaminated in situ with recent carbon.32 These constitute very strong evidence that the earth is only thousands, not billions, of years old.

Evolutionary anthropologists now say that Homo sapiens existed for at least 185,000 years before agriculture began,33 during which time the world population of humans was roughly constant, between one and ten million. All that time they were burying their dead, often with artifacts. By that scenario, they would have buried at least eight billion bodies.34 If the evolutionary time scale is correct, buried bones should be able to last for much longer than 200,000 years, so many of the supposed eight billion stone age skeletons should still be around (and certainly the buried artifacts). Yet only a few thousand have been found. This implies that the Stone Age was much shorter than evolutionists think, perhaps only a few hundred years in many areas.

13. Agriculture is too recent.

The usual evolutionary picture has men existing as hunters and gatherers for 185,000 years during the Stone Age before discovering agriculture less than 10,000 years ago.35 Yet the archaeological evidence shows that Stone Age men were as intelligent as we are. It is very improbable that none of the eight billion people mentioned in item 12 should discover that plants grow from seeds. It is more likely that men were without agriculture for a very short time after the Flood, if at all.36 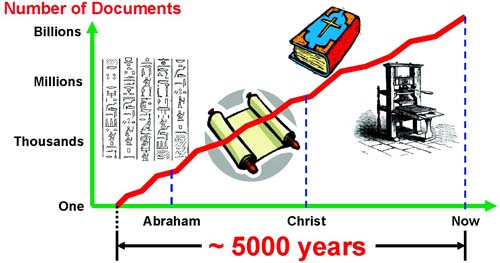 According to evolutionists, Stone Age Homo sapiens existed for 190,000 years before beginning to make written records about 4,000 to 5,000 years ago. Prehistoric man built megalithic monuments, made beautiful cave paintings, and kept records of lunar phases.37 Why would he wait two thousand centuries before using the same skills to record history? The Biblical time scale is much more likely.38