ARTICLE: “Many believe the Black Nazarene has miraculous powers and sick people will often resort to desperate measures to try to touch it.”
BIBLE: “You shall not make for yourself an idol, or any likeness of what is in heaven above or on the earth beneath or in the water under the earth. You shall not worship them or serve them; for I, the LORD your God, am a jealous God…” (Exodus 20:4,5). “‘Do not turn to idols or make metal gods for yourselves. I am the LORD your God.” (Leviticus 19:4). “The graven images of their gods you are to burn with fire; you shall not covet the silver or the gold that is on them, nor take it for yourselves, or you will be snared by it, for it is an abomination to the LORD your God.” (Deut. 7:25)
ME: Perhaps if these people had known about the second of the Ten Commandments, none of this would’ve happened…read on.. 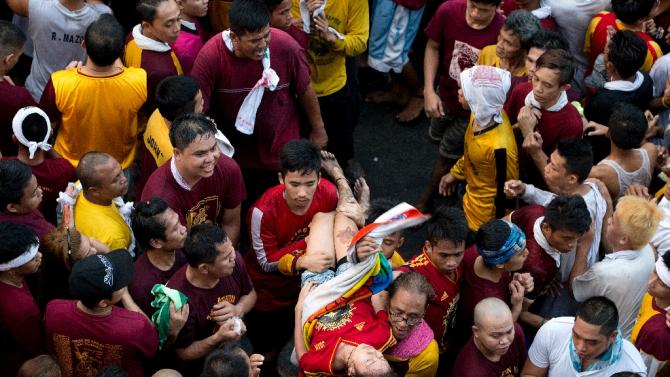 Manila (AFP) – Two people died and hundreds were injured during a huge religious festival in the Philippines, where barefoot crowds hurled themselves at a statue of Jesus believed to have healing powers, authorities said Sunday.

More than a million people turned out for the festival of the Black Nazarene on Saturday, one of the world’s largest religious gatherings, to see the life-sized statue wheeled through the streets of Manila.

Risking life and limb, shoeless men and women chanting “Viva!” (Long Live) ran over heads and shoulders to touch the icon as it made its way through the capital of Asia’s most fervently Catholic country.

Father Douglas Badong, rector of the Manila church where the statue is based, said one of the street vendors at the festival suffered a fatal heart attack.

“Because of the crowd, the heat, his body couldn’t take it,” he told AFP.

Another 27-year-old man, who was reportedly suffering from a liver ailment, passed out after helping to drag the statue’s float and could not be revived, Badong added. 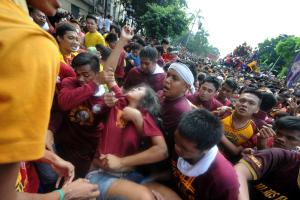 Police said at its height, about 1.5 million people took part in the seven-kilometre (4.5-mile) parade, which runs to the icon’s home inside the downtown Quiapo church.

Many believe the Black Nazarene has miraculous powers and sick people will often resort to desperate measures to try to touch it.

Philippine Red Cross secretary-general Gwendolyn Pang said her agency, which had a field hospital at the site, treated almost 1,600 people who were injured during the festivities.

Some 55 of them were “major cases”, such as fractures caused by the huge crush of people or strokes caused by stress, more than double the number last year.

Many of them were already ill, she told AFP, adding: “They probably thought if they take part in the procession, they would get better.”

Manila’s civil defence chief Johnny Yu said the procession was “a successful event”, despite the deaths and injuries, some of which he said was down to sick people taking part.